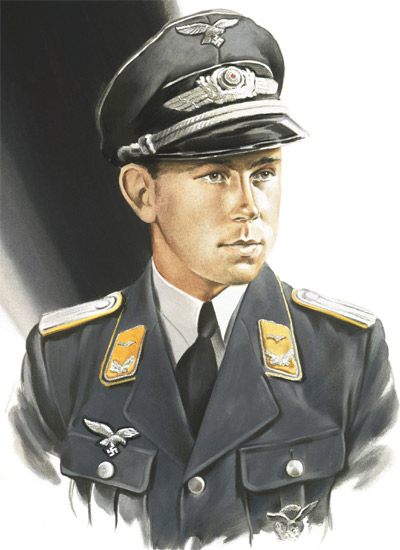 Ulrich Steinhilper was born near the end of World War I in the midst of an air raid on Stuttgart. He spent his early childhood in a small village and then moved to a town where his father was a teacher.

In 1936, he succesfully tested for Luftwaffe flight training and was granted his high school diploma early. As a cadet, he mastered the Heinkel 72 Cadet and the Focke Wulf 44 Goldfinch, received his pilot's badge and then went to an operational unit.

In early 1939, he was assigned as adjutant to Condor Legion veteran Adolf Galland. Steinhilper "volunteered" to command the group's radio communications unit and worked hard to integrate this new technology into flying operations.

In April 1939, the group was redesignated I./JG 52 and in the summer moved to an airfield east of Bonn. During the blitzkrieg into Poland, the group defended the Ruhr industrial region. In September 1939, Steinhilper was assigned a Messerschmitt Bf109 numbered "Yellow 16." During the sitzkrieg or "phoney war", the group moved south and engaged in sporadic combat over France until May 1940 when a new blitzkrieg to the west began.

In early August 1940, I./JG52 returned to combat in the opening days of the Battle of Britain. Steinhilper destroyed his first three enemy fighters, Spitfires, during a ground attack on RAF Manston. On 19 September, he achieved an aerial victory and by month's end, counted four. Nearing the end of October, he had logged over 150 sorties across the Channel and had become an ace. On 27 October he was shot down and captured - his flying was was over and the tide had began to turn against the Luftwaffe.

In January 1941, he was shipped to POW Camp 30, Bowmanville, Ontario, Canada. On 23 November 1941, he escaped and after a two-day odyssey by foot, truck and train was captured in Niagara Falls, Ontario. Steinhilper had actually spent 30 minutes clinging to a locomotive as it sat in a railyard in the then neutral United States. In less than three weeks, he escaped again and made it to Montreal, Quebec.

On 18 February 1942, Steinhilper and a friend, disguised as painters, used a ladder to escape; they made it to Watertown, New York, but after four days a policeman detained them. Steinhilper was soon sent to Camp 20, Gravenhurst, further north in Ontario. He escaped twice more, but in March 1944, hoping to be repatriated to Germany via Sweden, began to act "crazy". He was finally returned to Germany and freed in late 1946. Within days he had a job driving a truck for the American army. In 1948, he began work at Pan American Airways in Stuttgart.

In 1953 he moved to IBM-Germany and became an "ace" salesman. He soon made a suggestion on "ways to make a thought audible, visible and distributable." In 1972, IBM finally credited Steinhilper for the concept of "word processing."

Buy it
We also have portraits signed by Ulrich Steinhilper. These are currently only available in our Ebay Shop
To top