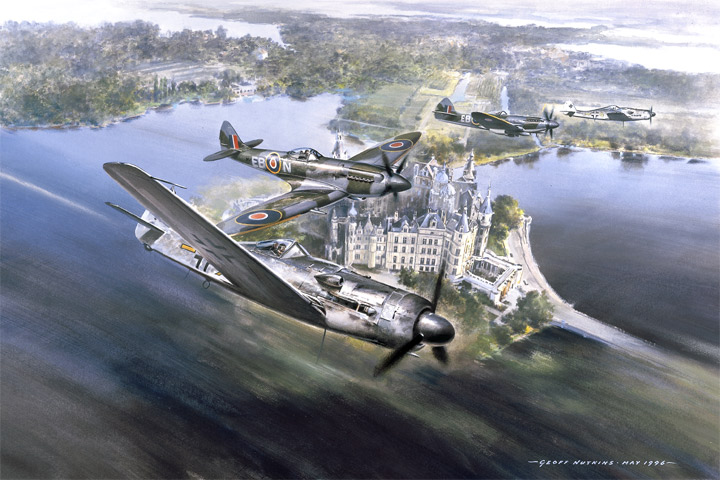 On May 1, 1945, six Focke-Wulf 190D-9's of 13./JG 51 under the command of Fahnenjunker-Oberfeldwebel Heinz Marquardt, took off from their base at Parchim to provide protection for a formation of 12 Focke-Wulf 190F-8 ground-attack aircraft that were flying into Schwerin airfield. This was intended to be 13./JG 51's last mission before surrendering to Allied forces.

At 1pm as the German aircraft approached Schwerin, they were spotted by six Spitfire Mark XIV's of 41 Squadron, led by Flight Lieutenant Peter Cowell. A fierce battle ensued during which two of the German fighters became separated, chased by Cowell and his wingman, Flying Officer Walter Jallands. As they crossed Lake Schwerin, the two Focke-Wulfs broke away in opposite directions. Cowell opened fire on the aircraft piloted by Heinz Marquardt, which went into a vertical climb, pouring black smoke, before flipping over and diving towards the ground. Despite head injuries, Marquardt managed to bail out before his plane crashed. By chance he parachuted into the grounds of a nearby hospital, where he received immediate treatment.
F/Lt Cowell proceeded to shoot down a second Focke-Wulf, while another, piloted by Feldwebel Heinz Radlauer only managed to escape the pursuing Spitfires by dropping to tree height.

Fahnenjunker-Oberfeldwebel Heinz Marquardt was only 22 at the time of this incident, but had already achieved 121 aerial victories in 320 combat missions (almost exclusively on the Eastern Front), along with a further 16 "unconfirmed". He was awarded the Deutsches Kreuz in Gold on 10 September 1944 after his 60th victory, and then the Ritterkreuz (Knight's Cross) on 18 November 1944 for his 89th.

Flying Officer Walter Jallands had only begun active service in March, 1945. In the last weeks of the war he flew an intensive series of fighter sweeps and low-level ground-attack missions.

Feldwebel Heinz Radlauer, already awarded the Iron Cross First Class for his combat victories, survived the encounter with 41 Squadron and shortly after surrendered to Allied forces as the war in Europe came to an end.