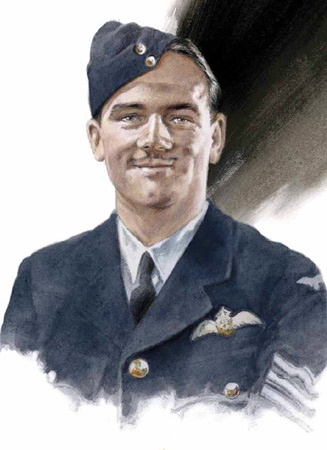 William James Green joined No.501 Squadron at Middle Wallop. Having bypassed OTU, he was entirely without Hurricane experience and taught himself to fly one before being officially taken onto the strength of 501 on August 20th 1940.

Four days later he crashed at Hawkinge after being hit by anti-aircraft fire during combat with Ju88's and Bf109's attacking Manston. On 29th August, he was shot down by Bf109's and baled out at 16,000 feet, falling to just 300 feet above the English Channel before his parachute opened properly, the pilot chute cords having been severed by cannon shell splinters. He was rescued from the sea off Folkestone, his Hurricane crashing near Hawkinge.

Green went on to join No.56 Squadron, and was shot down over Germany in February 1945. He was held as a prisoner of war until May.

This print is also available signed by Sergeant William Green