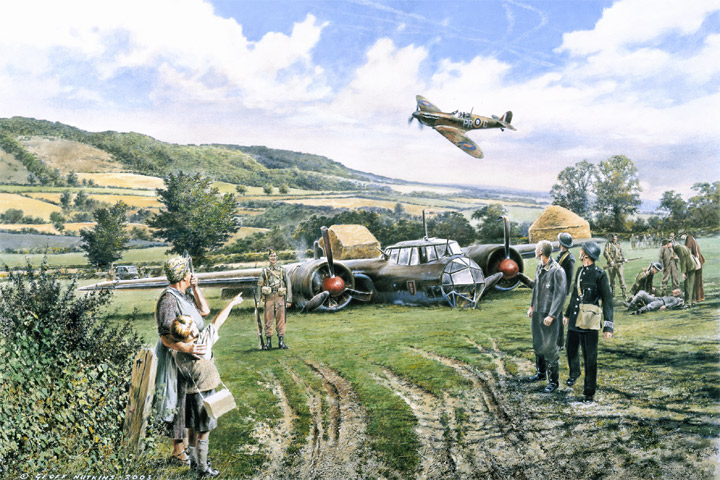 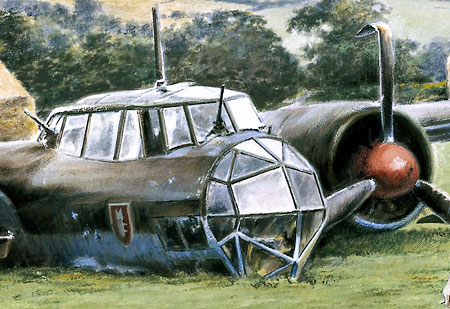 Sunday, September 15th, 1940. A Spitfire of No.609 Squadron piloted by Pilot Officer "Red" Tobin roars over a crashed Dornier 17Z from 8/KG76. Smoke still rises from the crashed Dornier's starboard engine as the bomber's pilot, Feldwebel Heitsch is led away.

Heitsch and his crew were attacked by two Spitfires from No 609 Squadron over North Kent. After a low-level pursuit along the Darent Valley, Heitsch made a forced landing in a field at Castle Farm, Shoreham.

Each print is accompanied by a certificate of authenticity as well as a copy of an eye witness account of the events.

Eugene "Red" Tobin  was an American volunteer from Los Angeles. He learned to fly in the late 1930's, paying for his lessons by working as a messenger at the MGM Studios in Hollywood. When the Second World War broke out, Tobin teamed up with fellow Americans Andy Mamedoff and Shorty Keough in a plan to join the Finnish air force, fighting the Russians. The plan came to nothing, but instead they travelled to France to join l'Armee de l'Air. Arriving in May 1940, France fell to the German Blitzkrieg before they could achieve their goal. The three Americans escaped across the Channel to England and decided to join the RAF. Despite the protests of US Ambassador Joseph Kennedy, they were accepted. After training on Spitfires, all three were posted to No.609 Squadron at Warmwell.

Tobin flew his first operational mission on 16 August, 1940, firing some 2000 machine-gun rounds at a Messerschmitt Bf110 without any obvious success. His skills quickly improved, and he scored his first kill - a Bf110 - on 25 August.

On 15 September, 609 Squadron intercepted a large enemy force above London. Having already damaged a Messerschmitt Bf109, Tobin spotted Heitsch's Dornier 17 heading for cloud cover. He closed in and opened fire, smoke immediately pouring one of the Dornier's engines. He pressed home the attack, joined by Flight Lieutenant John Dundas. Heitsch attempted to throw off his pursuers, but in the end had no choice but to crash-land his severely damaged aircraft.

On 19 September 1940, Tobin, Mamedoff and Keough became the first recruits to the newly-formed, all-American No.71 Squadron - the famous Eagle Squadron. Flying Hurricanes, the Squadron became fully operational February 1941. On 7 September, they flew their first offensive fighter sweep over France. They were met over Boulogne by Me109's from JG26. During the engagement, "Red" Tobin was killed when his aircraft flew into a hillside. He was 24 years old.