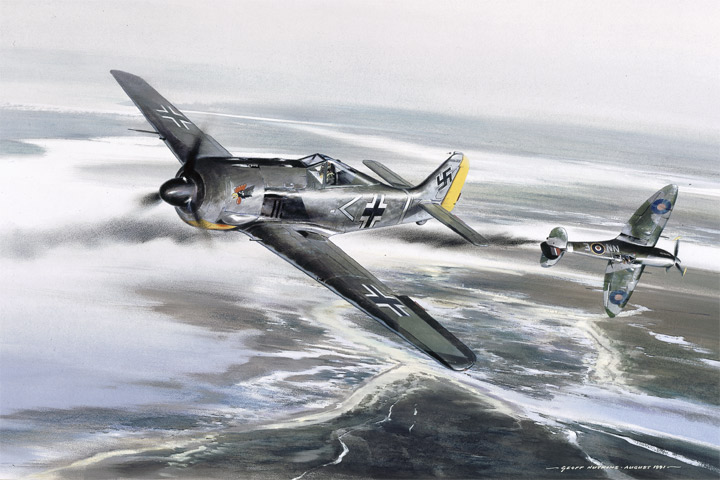 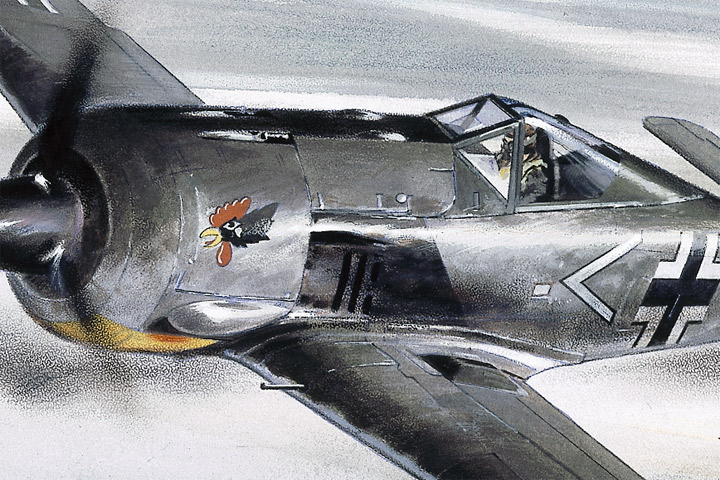 Oberleutnant Armin Faber was Adjutant to the commander of III/JG2 "Richthofen", but this day he had been given permission to fly with 7th Staffel. The unit was equipped with the recently introduced Focke-Wulf 190A-3.

7th Staffel was scrambled to intercept a force of twelve Bostons on their way back from a bombing mission. A fight developed over the English Channel with the escorting Spitfires, during which Faber was attacked by Sergeant Trejtnar of 310 Squadron. In his efforts to shake off the Spitfire, Faber flew north over Exeter. After much high-speed manoeuvring, Faber, with only one cannon working, pulled an Immelmann turn into the sun and shot down his pursuer in a head-on attack.

Trejtnar baled out safely, but the disorientated Faber now mistook the Bristol Channel for the English Channel and flew north instead of south. Thinking South Wales was France, he turned towards the nearest airfield - RAF Pembrey. Observers on the ground could not believe their eyes as Faber waggled his wings in a victory celebration, lowered the Focke-Wulf's undercarriage and landed. He was immediately captured.

At this time the Allies had been so desperate to assess the Luftwaffe's new FW-190, they had been considering mounting a commando raid on a French airfield to capture one. Faber's mistake saved them the effort. His aircraft was repainted in RAF colours and evaluated by the Air Fighting Development Unit at Farnborough. It provided the Allies with extremely valuable intelligence.