Battle above the Clouds 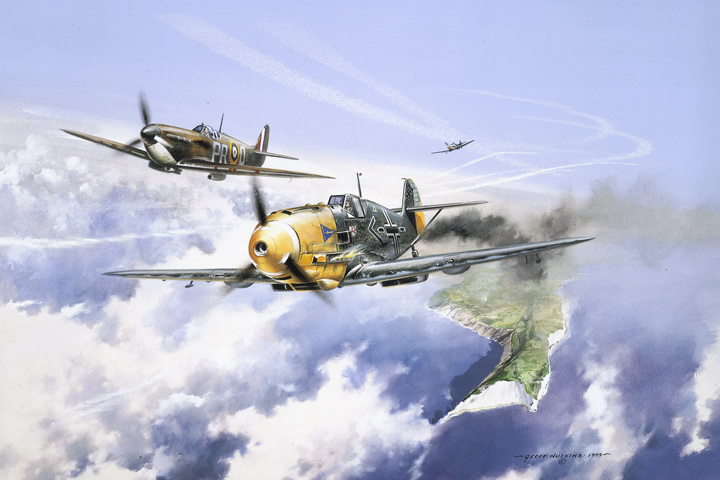 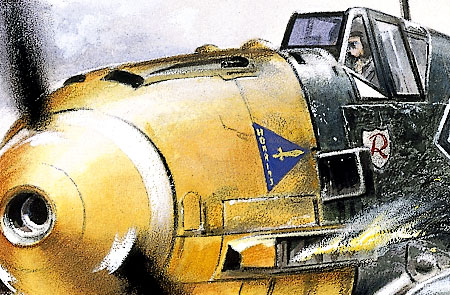 Gruppenkommandeur of 1./JG2 Richthofen, Major Helmut Wick races over The Needles at the western end of the Isle of Wight on the afternoon of 28th November, 1940, pursued by Flight Lieutenant John C.Dundas of No.609 Squadron.

Signed by these 609 Squadron pilots:

Helmut Wick joined the Luftwaffe in 1935 at the age of twenty. He was posted to Jagdgeschwader 2 "Richthofen" just before war broke out and scored his first aerial victory in November 1939. He reached his 22nd victory on 26th August 1940, for which he was awarded the Knight's Cross. Yet more victories followed, and on 5th October 1940 he shot down five RAF fighters in a single day, earning him the Oak Leaves Cluster for his Knight's Cross. Within two weeks he was promoted to Major (the youngest in the Luftwaffe), and given command of the now famous JG2.

On 6th November 1940, Wick again shot down five RAF fighters, and by 28th November his total had reached 55. This briefly made him the world's most successful fighter ace. Later that same day his unit became involved in combat over the Isle of Wight. Wick shot down yet another Spitfire (his 24th) but was then attacked by Flight Lieutenant John Dundas of No.609 Squadron. His Bf109 severely damaged, Wick was forced to bale out over the English Channel. His body was never found.

F/Lt John Charles Dundas joined No.609 Squadron before the war. He was one of the RAF's top aces, credited with 12 victories during the Battle of Britain, and had already been awarded the DFC. Immediately after downing Helmut Wick, John Dundas was shot down and killed by Wick's wingman, Rudi Pflanz.