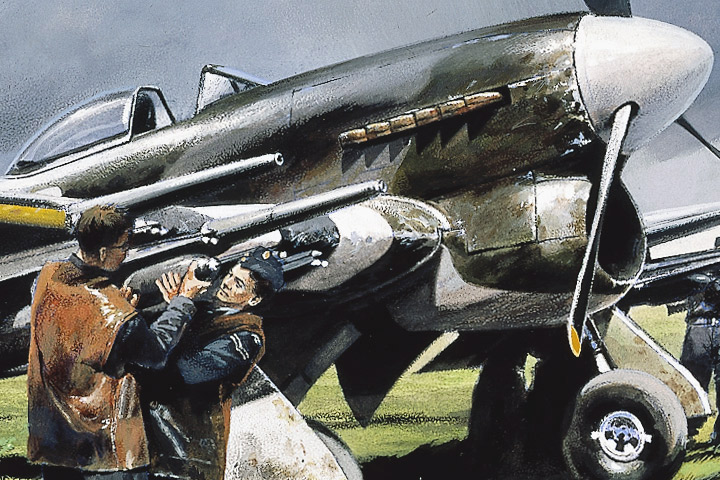 Armourers load rockets onto Hawker Typhoons of No.609 Squadron in readiness for the start of the offensive in Europe. Thorney Island, June 1944.

No.609 Squadron was formed in 1936 as a bomber unit. It was re-designated as a fighter unit in late 1938, but only received its fighters - Spitfires - at the very end of August 1939. During the Dunkirk evacuation the squadron flew defensive missions over the beaches, and throughout the Battle of Britain it was in the thick of the action. No.609 was the first RAF squadron to reach 100 kills, on 21st October 1940.

In April 1942, Typhoons arrived to replace the Spitfires and intruder sorties began to be flown in November. In March 1944, No.609 joined 2nd Tactical Air Force and adopted rockets as its main weaponry. In preparation for D-Day, the squadron attacked German communications and radar stations. Moving to Normandy shortly after the invasion, they provided the 21st Army Group with close air support. Later in 1944 the squadron began armed reconnaissance sweeps over Germany. On 15 September 1945, No.609 Squadron was disbanded.

A special edition of this print signed by eight distinguished veterans of No.609 Squadron is available in our Collector's Editions.