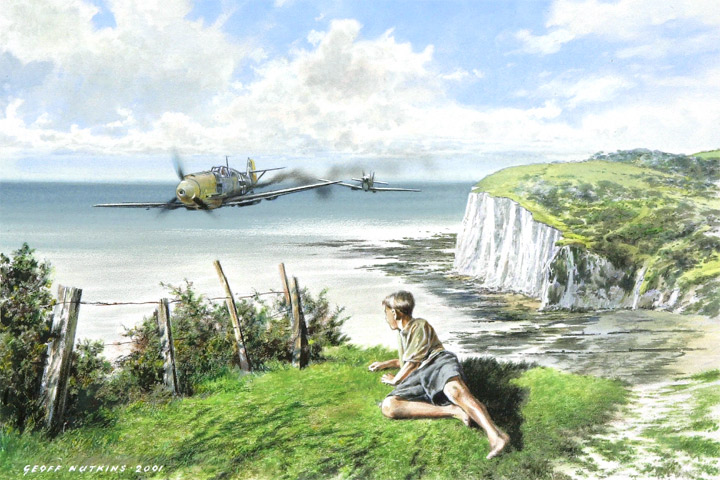 Wing Commander George Unwin closes in on a Messerschmitt 109E over the white cliffs of Southern England during the summer of 1940.

George "Grumpy" Unwin, joined the RAF in the late 1920s as a clerk. He eventually won his wings and was posted to No.19 Squadron at RAF Duxford in 1936.

George flew in support of the retreating BEF over Dunkirk in the early summer of 1940, gaining his first kill on 27th May. Within a week he had claimed four more enemy aircraft.

George continued flying with great distinction as a Flight Sergeant with No.19 Squadron throughout the Battle of Britain, chalking up a remarkable tally of combat victories, including three Me109's on 15th September alone. His fourteen confirmed kills during the Battle earned him two DFM's.

In no way a grumpy person, George's nickname was given to him by Douglas Bader. George had complained of a sleepless night during which Bader kept him awake by filing his prosthetic legs!

Commissioned in July 1941, George spent a period as a Flying Instructor and was later posted to No.613 Squadron. The Squadron flew in defence of Allied Forces before and after D-Day as part of the 2nd Tactical Air Force.

After the war, George was given command of No.84 Squadron, serving in Iraq and Malaya. He received a DSO in 1952. As a Wing Commander, his final appointment was as Permanent President of the Courts Martial. He retired from the RAF in 1961.