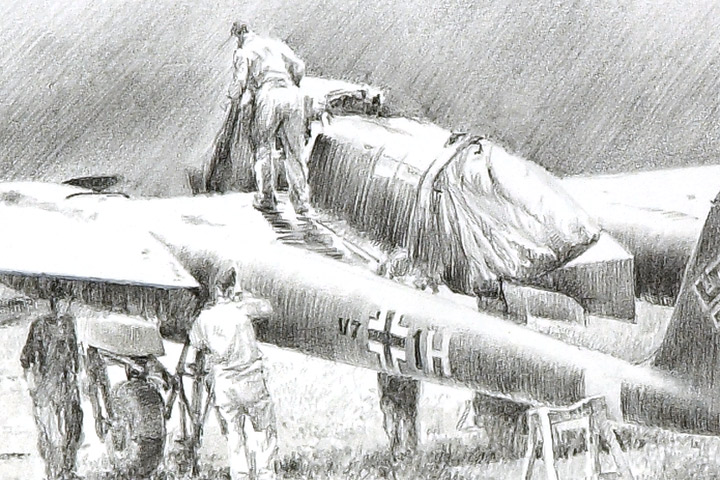 Focke-Wulf 189 reconnaissance aircraft V7+1H of Aufklärungsstaffel 1.(H)/32 is prepared for another mission over Russia, May 1943 at its base at Pontsalenjoki, Karelia near Murmansk.

In 1943, Aufklärungsstaffel 1.(H)/32 was based at Pontsalenjoki in the extreme north of Russia, close to the Finnish border. V7+1H's pilot was Unteroffizier Lothar Mothes.

On May 4 1943, Mothes, flying with two other crewmen, took off on a mission to photograph the Loukhi-3 airbase from an altitude of 20,000 ft. He was then to continue north along the Murmansk-Leningrad railway. Thirty minutes into its mission, the FW-189 was attacked by Soviet Hawker Hurricane fighters. Mothes put his aircraft into a nose dive to escape but owing to the damage already suffered he could not pull out in time and struck the tree tops. The FW-189's tail was torn off, and the crew nacelle was left hanging upside down in the tree branches. Mothes avoided serious injury, but one crewman was killed in the crash and the second died from loss of blood as a result of a severed leg.

Incredibly, Mothes survived two weeks in sub-zero temperatures, evading Russian patrols and living off bark and grubs as he walked back to his base. He eventually stumbled back into German lines, severely frost-bitten and malnourished. He spent the next nine months in a hospital before returning to active duty. He flew another 100 missions before the end of the war.

In 1991, the wreckage of V7+1H was found in the Russian forest where it had remained for 48 years. It was purchased by a group of British aircraft enthusiasts and shipped to the UK in March 1992. The "Focke Wulf 189 Restoration Society" was formed to restore the aircraft to flying condition. Mothes was re-united with his aircraft at the 1996 Biggin Hill airshow.

This print is also available signed by Unteroffizier Lothar Mothes